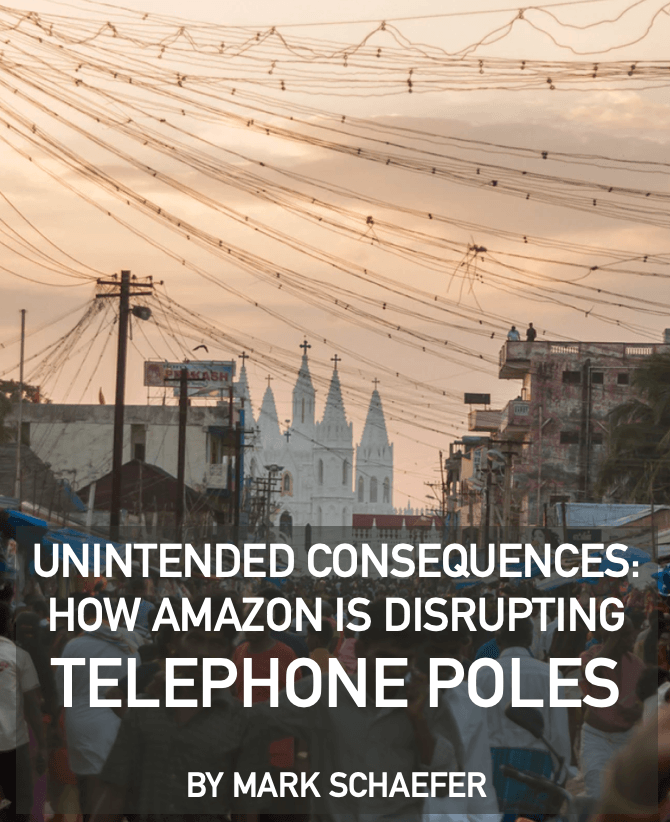 This week the New York Times did a long, investigative report on how Amazon has weaved its way into nearly every aspect of life in the city of Baltimore — government, education, politics, economics, and employment, to name a few. The city is mostly positive about its dependence on this gigantic company, but there were also a few unintended consequences!

I experienced this myself. I live far away from Baltimore. In fact, I live in the country but Amazon is disrupting life even here. They are disrupting our telephone poles!

A few months ago, a big DHL delivery truck dropped off a package at our home, which is situated at the end of a long driveway, at the bottom of a hill.

The driver took one look at it and said, “I’m sure glad we have insurance!”

The headline of this article promises news about how Amazon is involved in all of this, so let’s get to it.

Police and emergency vehicles arrived at the driveway scene and eventually, the truck was safely untangled from the wire.

But now, I had to get the wire to my house repaired. The electric company said they would put in a temporary fix but that they would have to come back and put in a whole new, larger telephone pole, which appeared to be fine to me.

For decades, the electric company has used 30-foot poles. That provided more than enough room for any traditional delivery vehicle — like a mail truck — to navigate a residential neighborhood.

But in the last 10 years, home deliveries from Amazon and other eCommerce sites have increased at such a rapid pace that bigger trucks have been coming into residential neighborhoods to keep up with the delivery volume.

Apparently my situation was not unusual. These trucks are getting caught by wires with regularity,  causing the electric company to replace the traditional pole with one that is 10 feet taller — 40 feet!

Think about how much it’s adding to our utility bills. Eventually, every telephone pole in a residential neighborhood will have to be replaced with the 40-footers and that cost will have to be recouped somehow.

There are eight poles on my street, serving five houses. That would be an assessment of $1,600 per household in this little thought experiment. Sort of an Amazon tax.

Anyway, I thought it was interesting. Who would have thought the electric bill is going up because we’re buying jeans from Amazon?