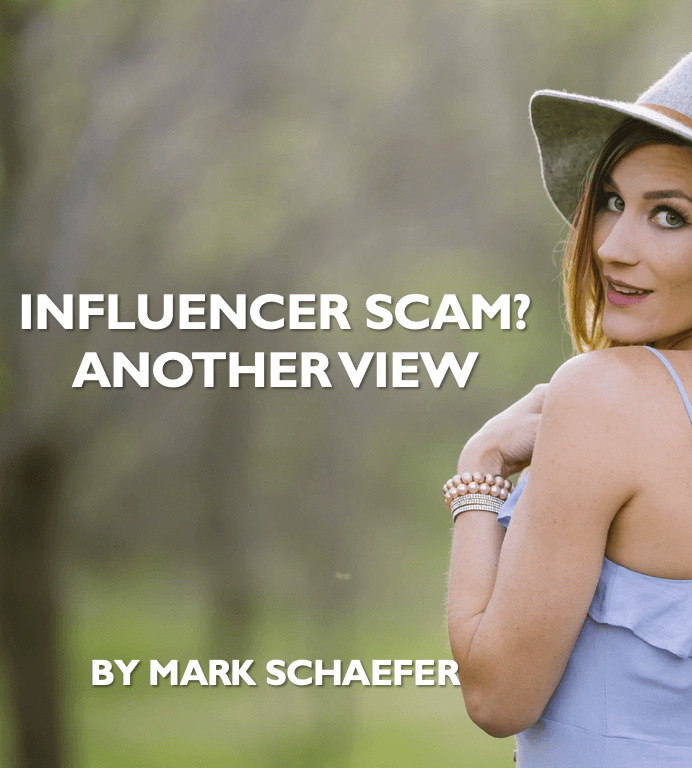 Recently Seth Godin wrote a post that received a ton of commentary on the social media stream: “The real scam of influencers.”  But there is no influencer scam at all.

The premise of his article: Seeking popularity on the web is not a sustainable business model. Instead, we should focus on meaningful work instead of signals of personal popularity like “likes.”

“There are tens of thousands of humans spending their days trying to be popular on Instagram, buying outfits, wearing hats and seeking their version of cute. People from all backgrounds and genders, hoping to be the next Kardashian.

“The lessons of the high school lunch table run deep.

“Part of the scam is that the pyramid scheme of attention will somehow pay off for a lot of people. It won’t. It can’t. The math doesn’t hold up. Someone is going to win a lottery, but it probably won’t be us.

“And a bigger part is that the things you need to do to be popular (the only metric the platforms share) aren’t the things you’d be doing if you were trying to be effective, or grounded, or proud of the work you’re doing.”

The post appeals to our sense of personal pride in believing that meaningful work matters — not these lightweight Instagram stars.

But Seth’s view reflects an attitude that is deeply out of touch with both scientific and cultural reality.

Popularity does not work for me. However …

Before I lay out a case for why Seth’s post on the influencer scam is out of touch, let me say that I completely empathize with him.

I will judge from his post that Seth might not have been the most popular kid at the “high school lunch table.” I wasn’t either. I wasn’t the star athlete, or the star anything. In my teen years I shuttled from school to school and was usually lonely and lost.

And like Seth, I haven’t played the internet popularity game. If I am popular in any way, it is probably based on the merit of my work. I’m a terrible networker and I would rather engage in an interesting discussion over dinner with friends than sucking up to people who can propel my reputation.

But there is one unavoidable, undeniable, deep-rooted, scientific truth that Seth is denying.

The mystery of the star executive

When I was in corporate sales, I once had a colleague who was enormously popular. Jim had been a star college athlete and, even into his 40s, he maintained his trim, muscular look. He was strikingly handsome with piercing green eyes and he was always generous with his time, counsel, and helpful spirit.

Jim was so incredibly popular that it was not uncommon for our customers to invite him to their weddings and personal family gatherings. Unheard of!

If the company ever had a customer hot spot, they would normally send in my friend Jim to ease the tensions. Nobody could be mad at him.

Because he was so deeply beloved, he rose quickly through the company ranks. At an incredibly young age, he was placed in a top marketing job overseeing our business unit’s growth in Asia.

Nobody could figure it out. He was an acknowledged superstar. But he could not adjust to this new promotion.

His long-time boss asked me for my view over dinner one night. What was going on? Jim was being groomed for the C-suite and had just stalled. What should he do?

His face twisted up a bit. He thought for a very long time and answered: “I don’t know.”

Isn’t that amazing? My friend had worked closely with Jim for 10 years and didn’t know if he was smart!

But that was the problem — and the opportunity. Jim was suddenly put into a job where you HAD to be smart. He was in an analytical marketing position and was DYING. But if you put him back in a career based on relationships, he would fly again.

The truth is, Jim had soared up the company ladder for just one reason. He was popular.

It’s in our DNA

This is the truth of our world. Popular people get ahead. Maybe Seth doesn’t think that is fair. Maybe I don’t think it’s fair. DO THE WORK!

But alas … popularity does matter and there is an overwhelming amount of research out there to support this truth.

Here is a Scientific American quote from a researcher that frames the problem with Seth’s argument:

“Research findings suggest that even 40 years later, we can predict who will graduate from high school or college, who will succeed at work, who will apply for welfare or social services, and who may suffer from debilitating mental health difficulties or addictions — all by knowing how popular folks were in high school.

“Our popularity even predicts our physical health. Those who were least popular in childhood are more likely to have cardiovascular and metabolic illnesses decades later than those who were well liked.”

Yup. Popularity is a big, big deal in this world. It’s not an “influencer scam.” It’s science.

We may think that getting ahead is not a popularity contest, but in many cases, it is … more than ever.

The weaponization of popularity

As one of the folks who was NOT one of the cool kids in high school, the reality of popularity and social media influencers seems unfair. Like Seth, I wish the world were a meritocracy.

The social media equivalents of the high school quarterback, Homecoming Queen, and class clown have found a way to scale their popularity and weaponize it as “influencers.” Why wouldn’t they? There are obvious lifetime rewards from being popular so why not amp it up for a profit? That seems smart to me.

From an intellectual perspective, this idea may seem shallow or even creepy, but the hard, cold fact is, these influencers sell shit. They sell shit like crazy.

In high school, we copied the fashion statement of the top jock and the head cheerleader. We still do. We always will.

My job as a marketer is to sell shit. If these people can sell shit for me, I want in.

An influencer scam? Check your emotions at the door

To win in business, you have to be open-minded about every sort of technological and cultural change. You have to constantly adapt and adopt.

In some cases — like the acceptance that the popular kids can sell shit — we have to check our emotions at the door and force ourselves to see the real world, even if it’s icky.

Thankfully, you do not have to be popular to win in this world. Sure, the internet has rewarded the gorgeous and the goofy, but it has also rewarded hard-working geeks like me and Seth Godin. Amen. What a great time to be alive!

But as a rational business professional, we have to recognize that there are LOTS of ways to make money on the web, lots of ways to create that singular emotional connection between our company and our customers. There is no influencer scam. There are just people who are different from me who appeal to people based on their personality. Cool.

We can do the work. We can be popular. It all works. Embrace reality. Embrace diversity.

Mark Schaefer is the chief blogger for this site and certainly not the most popular guy. However, he’s the author of several best-selling digital marketing books. He is an acclaimed keynote speaker, college educator, and business consultant.  The Marketing Companion podcast is among the top business podcasts in the world. Contact Mark to have him speak to your company event or conference soon.