Do you want to build an app as a side hustle? Know the risks.

As the pandemic forces more people to work from home or make dramatic career changes, many people are researching alternative ways to make money … like building an app.

There are many articles out there promoting the profit potential of app development. The idea of swimming in riches from coding at home might seem intoxicating, but there needs to be a balance to the discussion because there are also major risks. So let’s bring some focus to this discussion today.

Often financial “gurus” of the YouTube variety list “build an app” as a dreamy-sounding side hustle. They have stats on why you’re guaranteed to make money, suggesting that you can pay someone to do all the hard work for you. Please take note: if someone on YouTube pitches that and suggests you click a link or buy an online course on becoming the next Pinterest, block their account!

There was a time when software development felt like the Wild West. Young buckaroos headed out to make their fortunes in California with ten dollars in their pockets and the fastest fingers anyone’s ever seen fly over a keyboard. Now, I’d argue, we’re all customers at speakeasies, buying ourselves entertainment because we don’t understand the true price, and the people making money are the ones at the top who already have it.

Maybe those YouTubers were right 10 years ago, but not now. If it’s so easy to build an app and get rich, why are they shilling on YouTube?

Even Apple has a worm

I agree with most app development advice: if you want to build an app, start with Apple devices.

I am a loyal Apple customer. I love that they take privacy seriously, and I won’t be going back to Android-anything until they commit to major policy changes.

I don’t like that privacy is a premium product that not everyone can afford, but until our legislators realize that tech doesn’t care about the lofty ideals of our Founding Fathers, that won’t change. In fact, even government assistance cell phones are pre-loaded with unremovable malware that increases the likelihood of identity theft and other financial crimes against the owners. These cellphones run Android.

So why do I still worry about Apple?

This month, Apple announced that its devices and App Store had resulted in $519 billion of sales for other businesses in 2019. It then went on to clarify that only a fraction of that — $61 billion — came from digital services.

Why bother with that clarification? Because every developer listening was mentally multiplying that number by 0.3.

Apple takes a 30 percent cut of goods sold through its App Store (15 percent of recurring fees, if you qualify). So last year, Apple might have made up to $18.3 billion by allowing companies to charge their phone users for products Apple did not build. They hosted the products, they tested the products, and often they collected the money themselves, but the item being sold was not an Apple product or service. It was “their cut.”

And 30 percent is a lot. The Apple App Store was the first of its kind and set this number as a standard. Google and Amazon now both take a 30 percent cut as well. Developers hate this, rail against this constantly.

The EU just slapped Apple with an Antitrust lawsuit.  Spotify and Rakuten had both filed formal complaints against Apple on this front—Spotify for Apple’s promotion of their own Apple Music interfering with Spotify on iPhones, and Rakuten’s complaint was about the 30 percent cut Apple took from their ebook sales (while simultaneously promoting their own Apple-branded ebook store).

European developers often complain about the EU stifling creativity with lawsuits and regulations like GDPR. But American developers are watching with great interest and optimism, hoping that such litigation will change policies.

A third piece of bad news: Apple announced it was rejecting the previously approved HEY email app. The app, created by Basecamp founders and tech thought leaders like David Heinemeier Hansson, was rejected because HEY had no method of accepting payment on the iPhone for their $99/year privacy email service.

Since HEY was offering 100GB of storage on top of all their email services, the general consensus was that $99/year was a STEAL. Dropbox charges $120/year for that storage alone.

In order to keep from losing $30 of each sale to Apple, they figured that HEY customers could only buy it from their computer. Inconvenient, but better than overcharging the customer. 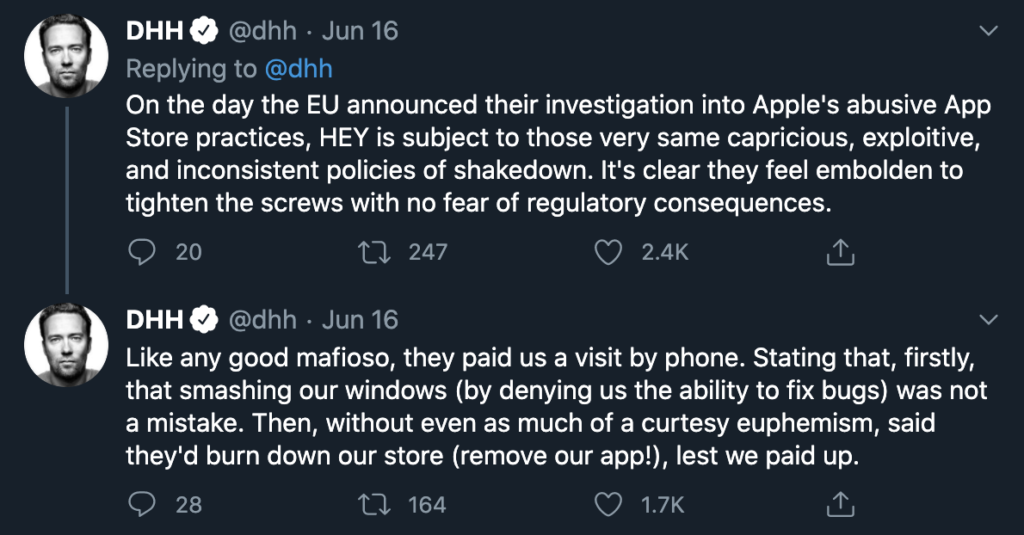 Apple rejected the idea. It’s not the first time they’ve made this rejection, but the HEY founders are probably the loudest, most important people they’ve shot down. And the timing is obviously not ideal.

I wasn’t the first to compare the App Stores of tech firms to gangster behavior. DHH will not go quietly into the night, and many Apple fans are also loyal Basecamp fans, so the drama is stirring.

But there’s actually a lot of smaller things that are problematic with the App Store, too.

App Store management is not transparent

In 2015, I was working on an iOS-only fitness app and became obsessed with getting an App Store Account Manager. I’d been told by successful friends that having someone on your side within the approval process was a cheat code that could get your updates pushed faster and help you become featured on the Apple App Store.

While I was never successful in getting our review time expedited — a very helpful thing when a bug in your code is interfering with your user experience — I was frustrated that many people had. I didn’t know what I was doing wrong. It turns out, Apple helps you the most when you build an app that becomes part of the gangster family.

The most consistent tips for success on Apple are (1) being only available on iOS or Apple products and (2) programming your app to highlight a new feature that is exclusive to Apple products.

In 2016 a talented developer, Bogdan Popescu, who had created the popular programming tool Dash was banned from his Apple account without warning. Dash was pulled from the App Store without explanation, which left even loyal Apple programmers reeling.

Over time, the explanations became murkier. Dash was not the only app banned by Apple — there were numerous apps associated with Popescu’s Apple ID over the years that had been pulled and in total over 1,000 fake reviews were found attached to those apps.

Apple’s fraud department had been investigating fake reviews and they took down Popescu’s current, squeaky-clean project when they took down old apps managed by his family. Popescu had a difficult time establishing a distance between himself and the fake reviews since he’d given his family permission to oversee the accounts, even though the reviews were not purchased in his name and there were new Apple IDs controlling the suspect apps at the time the reviews were bought.

And the most loyal of Apple developers became vicious. Even Apple lashed out, distributing proof of the fake reviews when a Hacker News thread tried to defend Popescu.

I find Apple’s attack on a single developer repugnant, even if the situation was complicated. Their evidence remains a smear on Popescu’s reputation, and when Dash was finally allowed back on the App Store 7 months later in 2017, many former users vowed not to redownload it, citing their distrust of the developer’s side of the story.

While Apple’s development tools (Xcode) are technically free, the true cost of a developer account is $99/year because the software is hard to use without buying other features.

Xcode, the development tool for iOS apps, also only runs on devices using Mac OS, and usually only the latest versions of that software (Xcode 11.4 requires Mac OS Mojave 10.14+)

This means you could either run Parallels or some other form of container for PC to get Mac OS to run on it, or get at least a 2015 MacBook Pro in used condition for ~$500-600, although depending on your app project complexity, either of these options might run painfully slow.

A mobile app developer I know just upgraded to a $3,600 MacBook and regrets not doing it sooner because of all the time saved in processing. But that particular model, without accessories or additional software, can also cost as much as $6,700 with the highest standard upgrade package.

Paying to build an app is expensive

And if you’re not the developer working for yourself, the cost to build an app begins to skyrocket. Hiring developers with in-demand language skills like React Native, Swift, or other iOS development languages will likely be over $100,000 per salaried junior developer and much more if you’re in a major metropolitan area.

Hiring a development firm and outsourcing your project to an established team is even more outrageous. BuildFire suggests $60,000 as its minimum estimate for a simple app.

I’ve never heard of anyone paying under $10,000, even for a clunky prototype app to show investors. And then the development team held the app hostage, offering to sell the idea back to them for thousands of dollars.

Time to build an app?

As with all things, only invest what you can afford to lose. If you have enough time to build an app yourself without taking a large pay cut, go for it. If you can afford to pay a reputable service to make a prototype or your first version and still make rent, sure, give it a shot.

But know the risks. This article should help a little with that.

Kiki Schirr is a freelance marketer who knows a little too much about the downsides of app creation. Besides her fitness app, she is also the former founder and CEO of a small video chat company that should have hung around for the shelter-in-place era. Maybe if she’d been less gun-shy on going mobile, right? Kiki is most easily reached via Twitter.

The post Do you want to build an app as a side hustle? Know the risks. appeared first on Schaefer Marketing Solutions: We Help Businesses {grow}.